About ten years ago my good friend, Ruth Kraut, shared her Passover Jeopardy game with me. It was very fun and I decided to make a new version every year. This has been a great addition to my family's Passover Seders ever since.  Since most of us will be doing virtual Passover Seders with our families and friends, I recommend adding this game to your Seder. Below is the original version Ruth shared with me, and my versions for 2018, 2019, 2020, and 2021.  Mix and match your favorite categories and make your own Passover Jeopardy game.
Click here for the answer key. 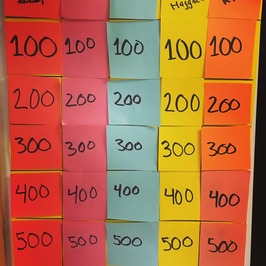 Category: FOODS OF THE SEDER
100: According to studies, in 2019 we ate an average of 293 of these per person.
200: In 1888 a Lithuanian immigrant opened the first factory of its kind in Cincinnati.
300: Ancient Greeks believed that this sprung from the blood of the hero Archimedes after he slayed a dragon.
400: In the American South, this was rubbed on foreheads to relieve headaches.
500: If Ali Yeganeh, who owned a restaurant in the TV show Seinfeld prepared our Seder meal, there is one part of the Seder meal he would refuse to serve.
Bonus points: What was his catchphrase?

Category: FREEDOM (arts and music themed)
100: This documentary shows how mass incarceration policies have taken the freedom away from millions of Black people in this country.
200: This person won’t let her “freedom rot in hell.”
300: Who gazed upon the chimes of freedom flashing.”
400: The collaboration of the civil rights anthem, ‘We Shall Overcome’, happened here.
500: If we followed the advice of Lynyrd Skynyrd's magnum opus, none of these animals would be kept in a cage.

Category: THE TEN PLAGUES
100: The females of this species can lay up to 8 eggs per day.
200: The world record for the heaviest one of these was set in 1986, in Bangladesh, weighing 2.25 pounds.
300: In 2020 in Kenya swarms of these were so large they traveled in clouds the size of football fields.
400: This species sheds its skin about once a week.
500: If Egyptians used a hot compress they could have got ridden of this?

Category: PASSOVER RIDDLES:
100: God brought forth a sickness--but it is really hard to define.
200: The briss had to be postponed because he was afflicted by plague number 7.
300: That toned bone on the Seder plate must do a lot of these.
400: How long until we get to eat? I don’t want to sing the four questions. Do we have to do the second night?  How would you describe this person?
500: If he only had this garden implement when god burned the bush.

Category: BASIC PASSOVER FACTS
100:  This number is featured throughout the Seder.
200: The salt water in which we dip our parsley reminds us of this bodily secretion.
300: This country hosts the world's largest seder.
400: In 2010 the current world record of 426 pounds was set for the largest one of this Passover staple.
500:  During Passover, the Coca-Cola bottling company of New York uses this instead of corn syrup to make coke for observant Jews.

Category: THE PLAGUE OF DONALD TRUMP
100:  During the 2016 Republican primary, Trump, referring to a debate moderator, said you could see this coming out of her eyes, coming out of her wherever.”
200:  As part of his immigration policy, Trump separated children from their parents at this location.
300:  In 2018 Trump ordered the shutdown of this National Security unit.
400:  After a unite-the-right rally in Charlotte, Virginia, Trump had this to say about the white supremacists after the rally turned violent.
500: This occurrence illuminated the combination of the Trump administration’s incompetence, cruelty, self-interest, and disbelief in science – with catastrophic implications for the world.

Category: PASSOVER RHYMES
100:  You buy large amounts of this to prepare for 8 days of Pesach.
200:  Amphibian sandals.
300:  Adding this leafy green makes this plague healthy.
400: This is the world’s best and most important seasoning to add to food.
500: God brought down some problems that caused some type of trouble in Egypt.

Category: ACTIVISTS AND REBELS
100:  She has a plan for that.
200: This supreme court justice co-authored an essay on women in the Seder.
300:  This man awoke to injustice when he saw an overseer beating a slave.
400: This man was a former slave who escaped, wrote an autobiography of his experience and became a powerful anti-slavery orator.
500:  In describing his experience marching in the civil rights movement, this man said, “I prayed with my feet."

Passover Jeopardy Option 2 (The original version Ruth shared with me)
Category: SIGNS OF SPRING
100:     You might use parsley, potatoes or celery for this part of the Seder.
200:     This ovoid object is a sign of birth.
300:     We use this at the Seder, but in some parts of the world it gets into groundwater and kills plants.
400:     This root vegetable, good for clearing the sinuses, can be found on your seder plate.
500:     This is another name for Passover.

Category: PLAGUES
100:     You need this inside you, but don’t want to drink it.
200:     This plague affects kids in school these days.
300:     This eighth plague is one of the few kosher insects.
400:     Firstborn people often fast the day before Passover to remember this horrible plague.
500:     The first four plagues affected two peoples.

Category: WOMEN OF THE HAGGADAH
100:     This girl saved her brother first, and then saved the Israelites with her well of water in the desert.
200:     Her royal highness pulled Moses out of the water.
300:     She had this special baby, gave him away, and then became his nanny and wet nurse.
400:     These smart women outwitted Pharoah’s order to kill all the Hebrew baby boys.
500:     Joseph had 11 brothers, but only one sister. W

Category: ACTIVISTS AND REBELS
100:     The Haggadah tells the story of thousands of Israelites rebelling.
200:     This man awoke to injustice when he saw an overseer beating a slave.
300:     This rebellion during the Holocaust was planned for, and took place during, Passover.
400:     The Haggadah says 5 rabbis spent all night studying the Exodus story, but actually they were doing something else.
500:     There is a legend that the Red Sea did not split until someone name Nachshon did something very brave.

Passover Jeopardy Option 3  (I created this version in 2017)
Category: GLOBAL WARMING (10 plague version)
100: The disease-causing chytrid fungus is deadly for which thin skinned Amphibian.
200: Coral reefs around the world are dying - but the warm temperatures in this body of water is protecting its reefs from death.
300:  This process is making our water undrinkable.
400: Heavy rain and high temperatures have triggered an increase of their invasion in desert areas.
500: There are two major classes of these - endemic and exotic. Infectious  bovine tuberculosis is an example.

Category: FOOD OF THE SEDER
100:    You might use parsley, potatoes or celery for this part of the Seder.
200:    This ovoid object is a sign of birth.
300:    We use this at the Seder, but in some parts of the world it gets into groundwater and kills plants.
400:    This root vegetable, good for clearing the sinuses, can be found on your seder plate.
500:    Jewish mothers never lie - if you eat this every day you will never get sick.

Category: JEWISH ACTIVISTS & REBELS
100:    The Haggadah tells the story of thousands of Israelites rebelling
200:  If she couldn’t dance, she didn’t want to be part of your revolution.
300: This Rabbi said “I felt as if my legs were praying.” After marching in Selma.
400: After the rest of their family was murdered in 1941, these brothers escaped to the forest and with a growing membership ambushed German patrols and survived the war.
500:    There is a legend that the Red Sea did not split until someone name Nachshon did something very brave.

Category: BLACK LIVES MATTER
100: 50 years ago Martin Luther King Jr went to Tennessee in support of these workers.
200: After escaping slavery he became a leader in the abolitionist movement.
300:  No need to have a ticket to stay at these basements, cellars and hidden compartments.
400:  Alicia Garcia, Patrisse Cullors and Opal Tometi created the black lives matters hashtag as a call to action after the murder of Trayvon Martin.

​Passover Jeopardy Option 4  (I created this version in 2019)
Category: GLOBAL WARMING (10 plague version)
100: Without permeable skin, this amphibian is less able to adapt to new climate and is at greater risk of extinction.
200:  Resulting from dramatic temperature shifts, a decrease in Dry Matter Intake, increased thermal stress, Reduction in thyroid hormone section and milk production, are examples of this.
300:  Sea level rising, shrinking mountain glaciers, strained municipal sewer systems, etc. will create a shortage of this critical part of daily life.
400: An increase in this has led to warming air and warming ocean temperatures – which has led to extreme weather like floods which increases the population of mosquito and ticks.
500: During a House Oversight Committee hearing on global warming and national security, Alexandria Ocasio-Cortez used this phrase to describe Congress neglecting to address these threats.

Category: FOOD AT THE SEDER
100:     Jewish mothers never lie - if you eat this every day you will never get sick.
200:     This can be eaten as a dessert or used to wipe off the table.
300:     We use this at the Seder, but in some parts of the world it gets into groundwater and kills plants.
400:     This can grow to the size of two feet and can eliminate bad breath.
500:     Intended to look like mud, this name derives from a Hebrew word that means clay.

Category: ACTIVISTS & REBELS
100:  After escaping slavery, she rescued approximately seventy enslaved people, family and friends.
200:  He founded the Youth International Party (YIPPIE) running a pig for the 1968 Presidential race and was part of the Chicago Eight.
300: These 3 young men were murdered when they tried to register Southern African Americans to vote during the Freedom Summer.
400: The Jews in this city made a final stand against the Nazi’s. Using pistols, a few rifles, 1 machine gun and homemade bombs they held off the Nazis for 28 days – before all were killed or sent to concentration camps and the city was burned.
500: One of the largest public spaces in the world, student led pro-democracy protests that captured the attention of the world - were held here.

Category: WOMEN OF THE HAGGADAH
100: This girl saved her brother first, and then saved the Israelites with her well of
water in the desert.
200: Her royal highness pulled Moses out of the water.
300: She gave birth to a boy, gave him away, and then became his nanny and wet
nurse.
400: These smart women outwitted Pharoah’s order to kill all the Hebrew baby boys.
500: Joseph had 11 brothers, but only one sister.

Category: PASSOVER RHYMES
100: A disgusting river.
200: The opposite of Manischewitz:
300: Amphibian sandals.
400: The foolish child who resents Passover starts a new hashtag with these two words:
500: Inside the Egyptian ruler’s bones: